My Triathlon in Cartagena, Ironman and Back...

December in Cartagena, Colombia and tonight we look at the ceiling, replaying the possibilities of the following day over, and over. The last year has been a rollercoaster of non-stop physical training and emotional preparation. Our goal is to complete an Ironman course on every continent, so far, two down and a whole lot to go.

Ironman is a †series of long-distance triathlons organized by the World Triathlon Corporation (WTC), consisting of a 2.4-mile (3.86†km) swim, a 112-mile (180.25†km) bicycle ride and a marathon 26.22-mile (42.20†km) run, raced in that order and without stopping. Half-Ironman races are also prevalent.

The beauty of the W.T.C. is its international presence. ≠≠Three dozen races take place all around the world. Miamis race was done and Cartagena was a new race, this medal would be one of a kind. The hotel was incredibly comfortable, especially for the price. Hotel Ibis, on the shore of the Cartagena bay, was riddled with triathletes and marathoners. The 5 to 20 thousand-dollar bikes, on their elite bike boxes, rested in the lobby in what appeared to be a never-ending row of athletes, with their Nike and Adidas gear standing in line to check in. As an American, I was incredibly surprised at the showers

The event took over the city.

Thousands of shiny bikes were in their position on the city square. The pebble stones that normally enveloped the picture were completely hidden under a sea of people. The dozens of languages spoken by participants overlapped one another, in and out of alleys within the walls of this ancient Spanish fort.

I put in all my paperwork and nab the clothes and accessories provided grabbing 20 packets of super-carb and caffeine charged GU gels for the race. After two plane flights and hours or assembling back together, I check in my ARGON18, a shiny red triathlon. The smell of arepas and cheese is inescapable through the crowd. The city is bustling with vendors and local street food providers, offering their home made, century old recipes for what to them is a fortune in American dollars. Much like the Olympics, many cities take advantage of the tourist boom from these events, in conjunction with the cheaper price of setting up the event outside of the US, makes mutually beneficial.

It was 4:15am when the alarm declared there was no turning back. This is that time before a race that I throw on my tri-suit and say, by the time you take this off, youll have your medal. My case is packed with the days essentials, ranging from anti-biotic cream, to second and third pairs of socks, goggles, and bike gear. By 8am the race is on. The hour-long queue in line for your turn to begin the swim appears to take years. Your competitors ramble on for years in an array of foreign languages, as some of us talk when were nervous. Over all, we were all equally mortified and proud. This type of event is so difficult, that the training is 99% of the journey, we just come to pick up our medals.

The swimmers wade into positions, between a series of military amphibious vehicles. This country is still in the midst of a low key, albeit deadly, civil war. Being a group of expatriates, we are targets for the FARC, a gorilla warfare insurgency that has been in the fight for half a century.

The race canon fires and the race begins. I place my goggles on, stretch my arm and swim. Swim, swim, swim. A set of encyclopedias can be written concerning my thoughts and experiences in this hour on the water. At first its about getting out of the stampede of swimmers on every side, hitting and kicking their way to survival. It takes a good 20 minutes to switch to automatic mode, letting your body and the training take over. During this time, when there is still about 6 hours left of physical exertion, is when you feel the most exhausted. Everything seems to go wrong. Will I make it? At this point everyone has spread out and the unavoidable dread of loneliness kicks in. This sport, regardless of the amount of people needed to successfully train and compete, is at the end of the day, an individual objective. To conquer oneself, and spend hours upon hours alone with your thoughts and motivating yourself to go through such persistent pain, is the most difficult task of all. 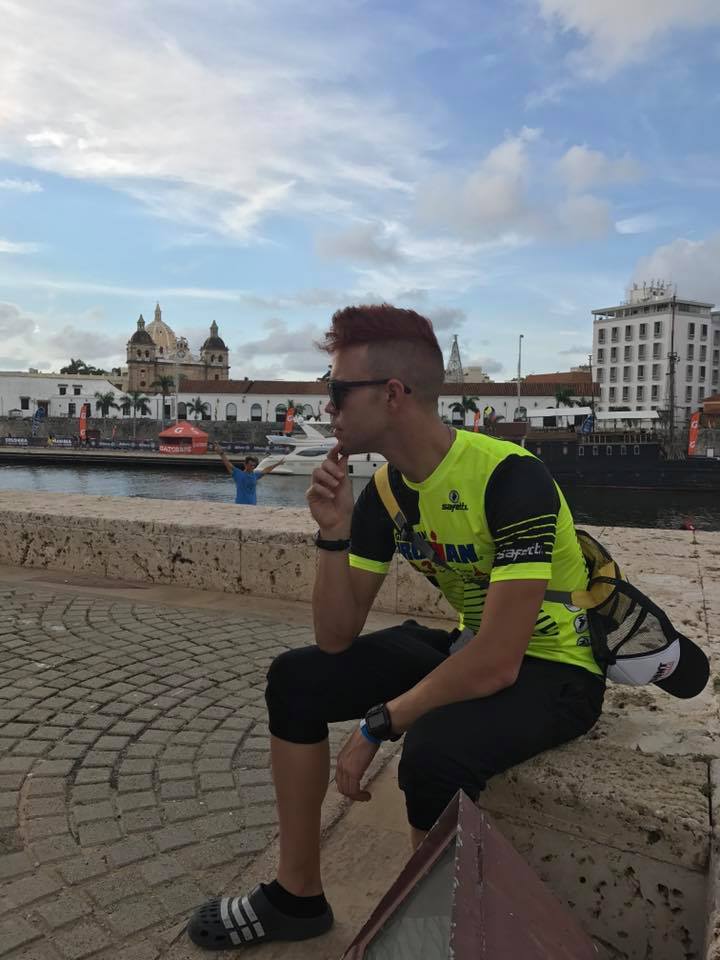 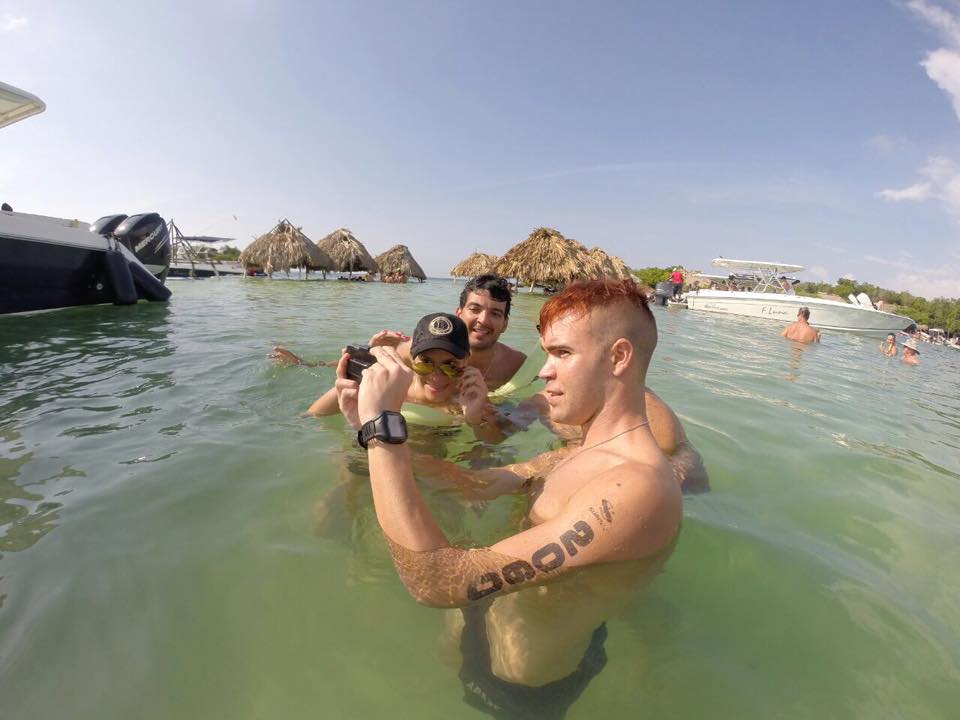 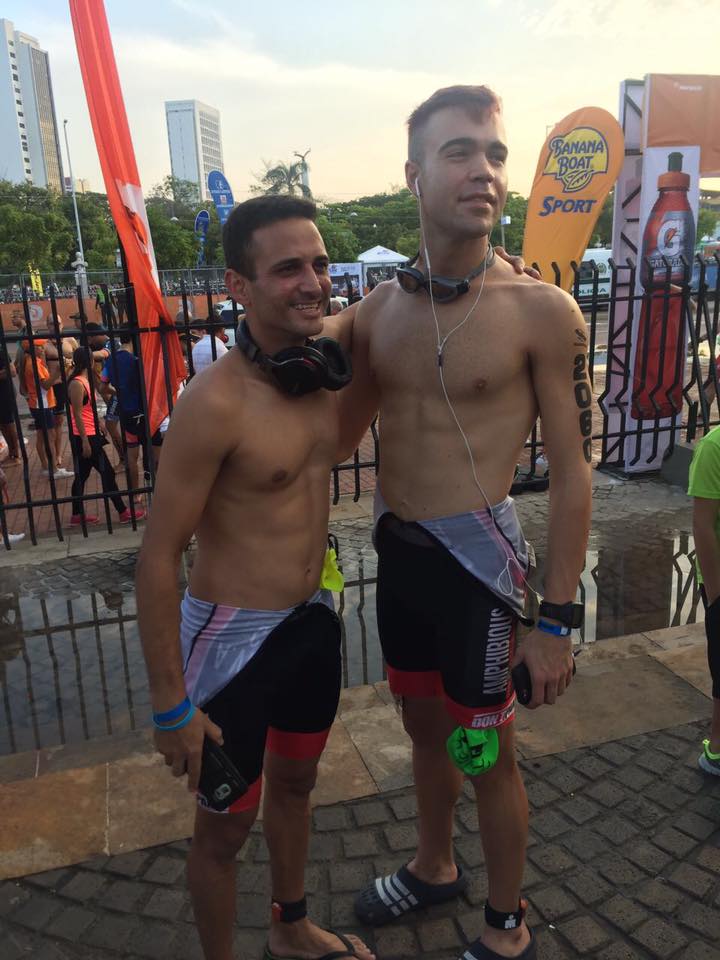 Finally, your body kicks in.

The 365 days of 4am and 6pm training sessions really show. As the other side of the bay gets close, the applause and cheering of the audience on the shore prevail over the cloudy Atlantic waters. A huge classic warship has its sails open by the stone-worked marina, if one is not careful, the waves can through you right under it. As I step by step, walk out of the ocean, my legs seem to fail me and I almost fall. I regain my balance, and remove my goggles and swim cap as my bare feet take jog into the bicycle square, where I throw everything on the floor and begin a quick change. Socks, gloves, number, water and go. So begins the longest part of the race, the bicycle coarse on the mountainous region of the northern Colombian coast.

Every couple kilometers, groups of children form groups that get held back by military officials. The kids throw their arms up at the athletes, begging for the Gatorade plastic coontainers were given at nutrition points along the route. We drink of discard of a lot of liquid just to be able to give them away to the children as we fly by at 50km an hour. †The roads can go from paved and smooth perfection to mud. Some athletes find themselves calling for aids with punctured and broken bikes, miles deep into the trail. It never takes long to get help, as the Army is closing guarding everyone along the road, as the insurgency might take advantage and kidnap someone for ransom.

My bike is soaked in sweat, and maybe tears.

The mountains can be brutal, and many quit. But I dont get to leave my country every day, I did not come here to fail. I pedal harder and harder, my left knee is on fire, my I will not falter. Its been hours and finally hit the turn around spot, somewhere closer to Barranquilla than Cartagena. I am whooshing down a hill when I find myself in the midst of a huge group of white butterflies, as the wind hits my face, they clear out and reveal the most beautiful sight I have ever seen. To my left, huge lush forests pouring over the mountains, my bike trail finds itself on a cliff and to the left my ocean crashes on the rocks under the bright sun and blue skies. Moments like these remind you, its all worth it.

My bike didnt let me down. Without having to change one tire, it made it. I fly into the courtyards and abandon my bike as I jump on the sneakers and change to the marathon gear. The crowd has not subsided and the cheers and applause thankfully persists. This time, the crowd has a sense of relief, as if there was a good chance we might not make it back at all. Not everyone did, granted no one was kidnapped or attacked, but there is a majority of us that simply do not make it. The reasons could range from not enough training, to overheating and loss of consciousness all the way to emotional breakdowns.

On to a few more hours of running.

The heat is on, quite literally. The marathon took a beautiful course zig zagging and winding around the ancient cities pebble stoned alleys and streets. All this stone, in the heat of a summer day by the equator created an oven effect. We were running in a chasm of fire. The locals had to no choice but to be involved as the entire fort was completely overran. Many of them helped the athletes with water guns and throwing snacks from their windows. My feet where enflamed and I was running on empty. The last hour was a delicate balance fluid intake and unmatched perseverance. Memory becomes cloudy as the body switches to energy saving mode where I appear to be asleep during a quasi-robotic jog.

The crowds volume as the end was in sighs switched from unbearable to desirable as I come back to full consciousness. All the pain drifts away as a seamless stream of adrenaline flows my mind and I run through the finish line, and my name is boasted on the speaker and the crowd erupts in sounds of approval and glory. I fall to my knees with a teary-eyed smile and everything goes dark. After a couple minutes of recovery, the staff helps me up and I limp my to retrieve my medal.

Five To-Do’s Before Becoming an Expat

5 Healthcare Innovations to Freak You Out.